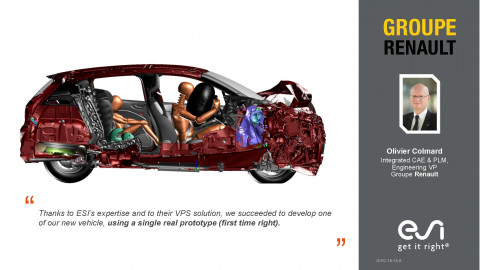 ESI Group, world player in virtual prototyping software and services for industrials, supported its strategic partner Renault Group in the realization of the new Clio 5 concept. Thanks to this collaboration and a consortium of partners, the Clio 5 obtained a 5-star rating at the Euro NCAP safety test.

The cooperation between ESI and Renault Group started in 2001, mainly focused on design and manufacturing methodologies for various vehicle models. Positioned as an agent of change working alongside Renault Group’s experts, ESI is one of the companies involved in the digital transformation initiated by Renault Group in 2017.  Renault Clio’s fifth generation is the first vehicle of the Group to benefit from the latest evolutions of this transformation program.

ESI relied on its expertise in physics of materials and its teams’ know-how to virtualize the concept stage until the crash-test certification. All physical tests were immediately successful, and no further testing was needed. This cooperation allowed a considerable rationalization of the concept phase, reducing the time spent on tests and consequently related costs.

The certification of a vehicle with a single physical prototype is a world premiere. It is as significant as the first virtual crash-test that was realized by ESI’s founders in 1985. This achievement positions Renault Group among the leading automotive industrials, equipped to seize the opportunities presented by the future of mobility. Thanks to this accomplishment, ESI meets its vision: to allow industrials to virtually manufacture their products with zero physical tests, zero physical prototypes, and zero unpredicted downtime. ESI provides a global answer to the increasing requirements of the automotive industry: innovate while producing faster, with more reliability and less cost.

“The virtual prototype of the new Clio is the result of a long collaboration,” said Cristel de Rouvray, CEO of ESI Group. “We are proud to have supported the teams of Renault Group throughout this project, and to have helped them increase their competitiveness in the field of numerical simulation and virtual crash testing, allowing them to get it right the first time in their development cycle,” she added.

Olivier Colmard, Vice-President of Numerical Simulation and PLM at Renault, commented: “The complementarity of the teams and the employed methodology allowed a considerable reduction in the Engineering phase in accordance with the objectives set by the Group.”

He concluded: “Thanks to ESI and their Virtual Performance Solution (VPS), we succeeded in developing one of our new vehicles, achieving good physical tests right the first time, allowing us to earn the whole five stars on the Euro NCAP safety test, following its stricter protocol launched in 2018.”