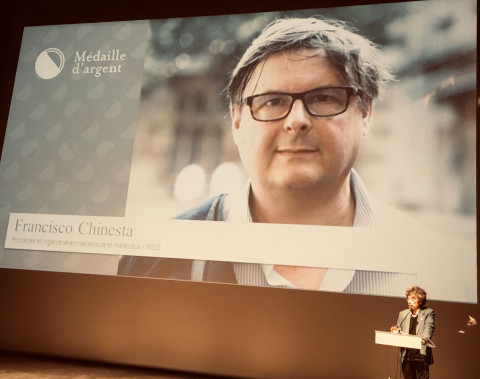 ESI Group, global actor in virtual prototyping and numeric simulation for industries, announces that Professor Francisco Chinesta, director of its scientific department and president of its scientific committee, was awarded the silver medal of the French National Center for Scientific Research (CNRS) during a ceremony on Thursday November 21, 2019 at the Arts and Culture Center of Meudon, France.

Professor Chinesta, 53 years, is one the most renowned international researchers in simulation and modelling, and professor of computational science at the French National School of Arts et Métiers (ENSAM). Holding a PhD in numerical mechanics from the “Universidad Politécnica de Valencia” in Spain, he notably managed the AIRBUS Chair, created an Academic Chair with Centrale Nantes and ESI Group in 2013, an academic chair with the University of Zaragoza in 2018, and another one with “L’Institut National Supérieur des Arts et Metiers” in 2019.

Globally recognized for his expertise, Pr. Francisco Chinesta was elected senior member of the “Institut Universitaire de France” in 2011, and later member of the “Real Academia de Ingeniería de España” in 2013. He obtained in 2018 the Zienkiewicz medal of the International Association of Computational Mechanics – IACM (New York, USA), and became Doctor Honoris Causa at the University of Zaragoza. In addition to these numerous activities, he is Editor in Chief and Coeditor of several international scientific publications and recorded nearly 300 articles and 600 participations in conferences.

Chairman of the ESI Group – Arts et Métiers chair, Professor Francisco Chinesta is convinced of the democratization of numerical simulation and the  manufacturers needs to use more efficient and cost reducing solutions to meet their transformation challenges.

Vincent Chaillou, Chief Operating Officer of ESI Group, commented: “It is a great day for ESI with this prestigious CNRS prize being granted to Professor Chinesta who deserve our recognition and congratulation. Thanks to his leadership and his collaboration spirit, we recently pushed several critical boundaries to foster our virtual prototyping solutions. Currently, he is contributing to render our Hybrid TwinTM solution operational in real time, to support the assisted and autonomous piloting in terms of assembling or vehicles, for example.”

“Scientific innovation is ESI’s DNA. With the emergence of new technologies (internet of things, Big Data, artificial intelligence), we bet on the hybrid paradigm model-data, materialized in the Hybrid Twin™ concept.  I feel really lucky to work with the highly qualified teams of ESI Group and their partners.” underlined Pr. Chinesta.

For the past 20 years, CNRS rewards the researchers who contributed most for the Center and the progress of its researches. In each of the CNRS 10 thematic institutes, the silver medal distinguishes one to five researchers “for the uniqueness, quality, and importance of his (their) works, recognized at national and international scale.”