ESI Group, world player in Virtual Prototyping software and services for industrials, supports KION Group, a global leader in industrial trucks, related services and supply chain solutions, in the design of its product development. ESI's Virtual Reality software IC.IDO, enables them to accelerate their digital transformation and increase productivity by reducing or even eliminating the need for physical prototypes during production processes. 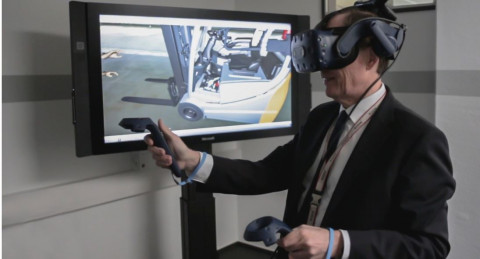 ESI has been supporting KION Group since 2018 in the evolution of its industrial product design methodologies. The collaboration began at KION's Châtellerault production site for forklift trucks of its Fenwick brand and was strengthened in 2019 in Germany with the STILL and Linde Material Handling brands. ESI is currently operating in 4 of the group's production sites in France, Germany and China.

Positioned as an agent of change working alongside KION Group’s experts, ESI is one of the companies involved in the digital transformation of the handling giant’s industrial design tool. ESI IC.IDO Virtual Reality software enables production lines and assembly to be planned at an early stage thanks to high-end visualization. Real-time physical simulation ensures realistic behavior of virtual, tested and approved products. This service extends to the maintenance of product components that can be evaluated even before a physical prototype is realized. Thus, the performance of the solution, which allows a large and complex data to be visualized, opens up the possibility of testing multiple design and product "customization" scenarios.

ESI meets KION's initial need to increase productivity by reducing time-to-market and overall costs. To achieve this goal, the teams had to reconsider the Test-and-Learn approach which consists of simulating a product and then creating a real prototype and so on until the simulated and real models match. Another benefit is that the solution can be used by all kind of profiles within the company – not only industrial engineering experts but also marketing and sales teams. The user interface allows multiple departments to manipulate the prototype in a fluid and intuitive way.

"At KION, the tool is intended to contribute to even better cooperation between the R&D, Quality, Industrial Engineering and Service departments. It has been very well accepted by all users so far, because the advantages are obvious and it is highly appreciated due to the interdisciplinary exchange,"

"We are proud to support the KION Group in deploying this solution for several of its brands. Digitalization of production tools is a path that is often complex. It is not about adding a method or a new step to the process, but rather adapting and reviewing it completely. With our Virtual Reality solution, we aim to provide a global, inclusive, reliable, and human-centric solution to anticipate ergonomic problems and process design errors well before the start of production,"