Dirisolar Reclaims the Sky with Its Ecological Airship

An aircraft for cargo and passenger use with unlimited flight time, 100% carbon-free flights, and 90% of components made from recycled material... Where do we sign up? 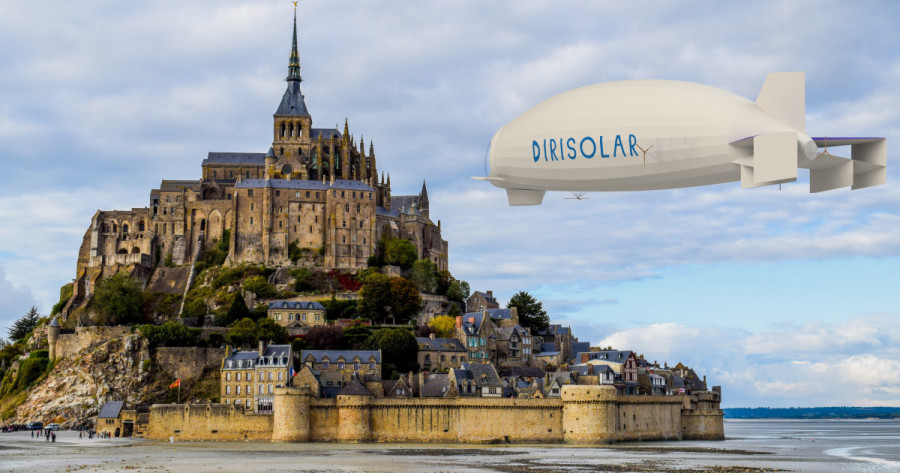 According to the Center for Biological Diversity, if the aviation industry were a country, it would place sixth in greenhouse gas emissions, between Japan and Germany. Aircraft manufacturers around the world are striving to reduce fuel consumption, and new incumbents are reimagining the possibilities of air mobility altogether. With the COVID-19 pandemic drastically reducing air travel, companies like Dirisolar are ever more committed to reinventing how people travel!

A glimpse into the history of flight

From kites to hydrogen balloons and airplanes to helicopters, there has always been intrigue in the concept of flight. But something we don’t often hear about is airships. What is an airship and why don’t we hear about them anymore?

The history of airships and the adventure of free human flight began on November 21, 1783, in France with physicist Pilâtre de Rozier and the Marquis d'Arlandes, who flew a "hot-air balloon" over Paris for 9 km. Technology continued to develop into a hard-shell and in 1910, the first commercial airship company began flying passengers in airships. Unfortunately, this was short-lived. The Hindenburg hydrogen airship caught fire and crashed in New Jersey in 1937, marking the end of airships for commercial passenger transport. That was until a man by the name of Philippe Tixier had a dream of continuing his grandfather’s legacy of flying airships and devoted his life to transforming the aeronautics industry.

The next generation of airships

Mr. Tixier founded the Dirisolar Company in 2009. In 2012, it signed partnerships to produce the first manned solar airship, which is planned for flight in 2023. Dirisolar's solar-powered airship is part of an ecological approach to the transportation of the future. It offers multiple usages – from passenger and cargo transport to scientific explorations and ground observations – and its maneuverability, its ability to land on the ground without any external assistance, paired with its unlimited flight time, make it attractive to almost all sectors.

Dirisolar airships are designed, first and foremost, to ensure the safety of passengers and to fulfill eco-tourism expectations.

So, what makes this aircraft so unique? The entire craft is suspended in the air by helium, powered by solar panels - offering 100% carbon-free flights – and is completely autonomous. Its fully electric engine propels it in silence, registering at only 47 decibels. Additionally, a whopping 90% of the airship's components are made from recycled material! The startup is also designing a production process that will limit carbon emissions.

Tackling the challenges of a novel aircraft

But the thing that makes the Dirisolar even more unique is its rigid hull and front cabin, which also happen to be the same things that made it a challenge to build.
Weight, size, and a thin envelope – things you worry about when mailing a letter or building a solar-powered airship? Maybe both!

Finding the compromise between weight and strength is critical for any aircraft. The vessel must be strong enough to withstand wind and other forces acting on it during flight and continue to do so over the course of the craft’s lifetime. For the Dirisolar, measuring 50 meters long, 12 meters high, and 15m wide, weighing in at roughly 1 300 kg empty, and only being able to withstand 40km/hour winds, weight optimization is crucial for production. Additionally, the Dirisolar team needs to understand how the airship will respond to meteorological and areological disturbances it would face in the air, which cannot be predicted or reproduced in a wind tunnel.

Last but certainly not least, we come to the craft’s landing technique. A vessel of this size, weight, and design would require a group of 20 to help it land safely. But because this craft is intended for tourist flights, happening several times a day, that’s impossible – can you imagine having a crew of 20 waiting for each flight to land?! Luckily, Dirisolar already had developed a technique that would allow for them to safely land the aircraft without any external assistance, but with a price tag of 8 million euros for the first flight, there was zero room for error. Dirisolar needed to ensure that, with this technique, their first real prototype would also be their last.

After meeting via the aeronautic simulation world, Dirisolar began its relationship with ESI Group in 2014. They started using ESI’s solutions to conduct performance tests and to evaluate aerodynamic forces.

​Dirisolar began using simulation in the design and pre-certification phases to execute linear and non-linear mechanical calculations and simulate critical design aspects. Access to advanced simulations and calculations enabled them to design the airship and study all of its possible load cases, without ever relying on a real prototype.

That’s the most beautiful and unique thing about Virtual Prototyping – you can take your wildest, 8 M € ideas and bring them to life without spending even a fraction of that!

Through the use of Virtual Prototyping, they were able to analyze aerodynamic forces and wind resistance up to 135km/hour. This ensured the all-weather maneuverability of the craft and validated its ability to land without any external assistance. Harnessing Virtual Prototyping during the design phase allowed Dirisolar to quickly investigate an incredible number of variants, and correct errors expeditiously.

ESI’s engineers worked closely with the team to fully understand their challenge and to help them work smarter instead of harder. And with an introduction to the ESI VPS Cloud Computing solution, Dirisolar avoided investing in HPC servers, directing all the startup’s effort in the “what”, not the “how".

Virtual Prototyping helps us anticipate the behavior of the physical aircraft: it is the only solution that optimizes time and costs.

Aiming to get it right the first time

The team at Dirisolar is bringing their dream to fruition, via simulation, which has proved essential because it's imperative to get it right the first time. For their passionate engineers who have dedicated years of their lives to this ground-breaking project, the confidence in knowing that the results are accurate gives them a peace of mind they couldn’t put a price tag on.

Discussions between Dirisolar and the European Aircraft Safety Agency (EASA) are underway. Ultimately, they will use the simulation results to certify the aircraft, enabling it to be mass-produced and marketed.

Dirisolar plans to first target tourist flights and then diversify their offerings towards other applications, such as forest fire prevention, anti-poaching, pipeline surveillance, and more.

Dirisolar, we can’t wait to see your name in the sky!

Learn more about Dirisolar and their fundraising efforts

Natasha Baccari began her career with ESI in 2014, gaining unparalleled experience in the Virtual Prototyping space, while also establishing herself as a respected voice in the industry. As a content writer, Natasha is known for her expertise in taking technical facts and turning them into an easy-to-read story. When she isn’t writing success stories, she is focused on creating engaging content for the company’s website, blog and collaterals. While her writing currently focuses on software, Natasha started her career in medical writing when she published her own medical magazine for the public.