22 Septembre 2020
Paris, France
Over one thousand CEOs endorse Statement on Renewed Global Cooperation and pledge to unite in the business of a better world

UNITED NATIONS, New York, 21 September 2020 — More than 1,000 Chief Executive Officers from companies in over 100 countries have demonstrated their support for the United Nations and inclusive multilateralism by signing onto a powerful Statement from Business Leaders for Renewed Global Cooperation. 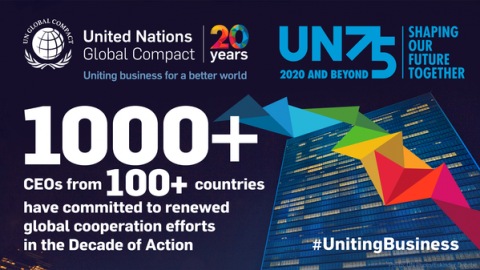 The Statement of support – including the full list of CEO supporters – was presented to UN Secretary-General António Guterres by Sanda Ojiambo, the CEO & Executive Director of the UN Global Compact, at the opening of the Private Sector Forum on the sidelines of the High-level meeting of the General Assembly to commemorate the 75th anniversary of the United Nations.

“The Statement is a resounding endorsement of inclusive multilateralism. In no uncertain terms, it says that cooperation must cross borders, sectors and generations for us to adapt to changing circumstances. In the course of just one month after we issued the Statement, it has been signed by 1,294 CEOs from large, medium and small enterprises in virtually every industry and region. We deeply appreciate their commitment to global cooperation at a pivotal time for the UN and the world at large.”

The 75th anniversary of the founding of the United Nations comes at a time of unprecedented disruption and global transformation, serving as a stark reminder that international cooperation must be mobilized across borders, sectors and generations to adapt to changing circumstances.

In the spirit of renewed global cooperation, public and private institutions need to show they are accountable, ethical, inclusive and transparent.

The statement endorsed by CEOs states:

“We, the business peoples, recognize that peace, justice and strong institutions are beneficial to the long-term viability of our organizations and are foundational for upholding the Ten Principles of the UN Global Compact and achieving the Sustainable Development Goals (SDGs). Now is our opportunity to learn from our collective experiences to realign behind the mission of the UN and steer our world onto a more equitable, inclusive and sustainable path. We are in this together — and we are united in the business of a better world.”

Under the headline Uniting Business LIVE from 21-23 September, the Private Sector Forum is the first in a series of three events on the sidelines of the 75th session of the UN General Assembly organised by the UN Global Compact to promote principled business and the Sustainable Development Goals.

The CEO Statement also supports the objectives of Sustainable Development Goal 16: to promote peace, justice and strong institutions. Through the UN Global Compact’s Action Platform on Goal 16, interviews with 60 senior executives in June and July revealed that – alongside environmental and social issues – they believe good governance lies at the heart of good business.

ABOUT THE UNITED NATIONS GLOBAL COMPACT

As a special initiative of the UN Secretary-General, the United Nations Global Compact is a call to companies everywhere to align their operations and strategies with ten universal principles in the areas of human rights, labour, environment and anti-corruption. Launched in 2000, the mandate of the UN Global Compact is to guide and support the global business community in advancing UN goals and values through responsible corporate practices. With more than 10,000 companies and 3,000 non-business signatories based in over 160 countries, and more than 60 Local Networks, it is the largest corporate sustainability initiative in the world.