This project was a success essentially due to the close collaboration between Renault and ESI. It brought to light the outputs and benefits linked to large size models for crashes. We

were able to handle the challenges tied to the model’s creation and its use within an intensive context, such as optimization.

Renault’s objective was a frontal crash with a Dacia Lodgy vehicle, already on the market. The objective was double: to determine if it was worthwhile to increase the model’s discretization, and to test optimization methods on large scale models while increasing the number of optimization parameters.

For the first time, Renault has been selected by the Partnership for Advanced Computing in Europe (PRACE). PRACE promotes several projects each year, allocating free calculation hours based on the scientific excellence of the projects. Renault, ESI, the Ecole Centrale of Lyon, and the Ecole des Mines in Saint-Etienne were provided with 42 million hours, the largest allocation ever awarded to an industrial by PRACE.

This collaboration was obvious in light of both partners’ strengths: on one end the knowledge and development of ESI’s Virtual Performance Solution and on the other end, modelization and optimization of vehicles by Renault.

This unprecedented opportunity translated into calculations on the CURIE supercomputer in order to conduct the largest vehicle optimization study ever launched.

Initially, Renault focused on formatting the data while ESI worked to adapt its codes’ architectures to such models. Both parties’ data was fed through a high-speed secure connection to the CURIE machine at PRACE where calculations ran daily. 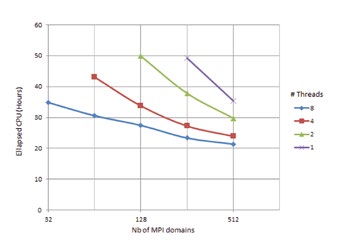 Indeed the sheer size of the model rapidly called for evolutions in the existing codes’ architectures. ESI provided support to adapt its products to such models.

Scalability was evaluated up to 4096 Cores using Hybrid parallelism.

Optimal configuration was found using 1024 Cores. Run time was 30 hours. The optimization study has involved up to 40 000 Cores simultaneously.

The refined model (element size of 2mm instead of 5) enabled to predict some very important physical phenomena which could not be addressed by previous models, namely: the impact of manufacturing (stamping) processes, steel and spot welds rupture, windshield rupture, and detailed occupant behavior.

This study allowed for the involvement of all Renault divisions linked with simulation. Internally, this project was led in a highly collaborative way, in which each division contributed by offering its own expertise.

During the optimization study, in addition to mass and costs reduction constraints, Renault added an important industrial requirement: the number of components re-used from the previous vehicle. To accommodate this request, some modifications were made to the algorithms searching for an optimum solution.

Several hundreds of simulations were performed, showing that some significant mass reduction could be reached while re-using about 80% of the parts.

The project was completed successfully and demonstrated the possibility to develop and use such detailed and predictive models in optimization studies.

This unique collaboration was recognized by the prestigious HPCwire Best Use In Automotive Industry “Readers’ & Editor’s Choice” award, distributed during the SuperComputing 2014 event in New Orleans, on November 17th, 2014

The Renault group has been making cars since 1898. Today it is an international multi-brand group, selling more than 2.7 million vehicles in 125 countries in 2013, with 36 manufacturing sites, and employing more than 117,000 people. To meet the major technological challenges of the future and continue its strategy of profitable growth, the Group is harnessing its international development and the complementary fit of its three brands, Renault, Dacia, and Renault Samsung Motors, together with electric vehicles, the Alliance with Nissan, and its partnerships with AVTOVAZ and Daimler. With 12 world championship titles, Renault’s expertise in Formula 1 is equally remarkable, as a vector of innovation, image, and awareness.