Using IC.IDO allowed us to detect numerous failures in our power station 3D mock-ups, be-fore it was too late to halt the construction process. By identifying these kinds of critical mistakes, Mitsubishi Hitachi Power Systems Europe has avoided significant time loss, and the costly penalties we would have paid. The ROI of IC.IDO is indisputable. ESI helped Hitachi not only detect errors but actually prevent them.

The global energy sector today faces an unprecedented number of challenges. Companies that plan, design, construct, and operate power plants need every day to be more flexible, to innovate incessantly, and to reduce costs. In addition, they face tough competition, particularly from emerging countries.

In this context, Mitsubishi Hitachi Power Systems Europe (MHPSE) decided in 2006 to look into new tools that would enhance collaboration with the numerous stakeholders (contractors, subcontractors) involved in any capital-intensive power plant construction project. It is often very complex for companies like MHPSE to control the quality of the work of subcontractors spread all around the world. However, they are very dependent on their subcontractors and are constantly under pressure relative to project milestones. Any delay or defect in project deliverables can lead to huge penalties.

“In some cases, the penalties can amount up to millions of Euros. This is why we needed a tool that would enhance communication with contractors and subcontractors and decrease the risk of critical errors during the engineering process. IC.IDO Virtual Reality was clearly the best solution,” declares Christoph Kastl, Head of technical IT at Mitsubishi Hitachi Power Systems Europe.

Immersive Virtual Reality: place yourself in your 3D mock-up

MHPSE had been using with solid models as a basis for iterations between different project participants for a long time. One of their pain points was the inability to interact or experience the digital mock-up and instead having to rely on generating screenshots circulated via email. Static pictures were not an effective basis for discussions between all involved parties.

With IC.IDO, MHPSE is able to fully experience their 3D prototype in a highly immersive environment. They experienced their 3D mock-up in real-time and at real size, moving around it; perceiving, identifying and pointing out potential errors and inconsistencies in a very intuitive way. IC.IDO enables a true collaboration;bridging the gap between different engineering domains, generations, languages and cultures.

At this point, MHPSE was able to share the benefits of 3D immersive visualization with a wider audience. The acceptance was immediate, not only from MHPSE’s contractors and sub-contractors but also from their engineering department. All were very impressed when they realized that they could perform highly efficient engineering reviews in real-time, real size, with very little data preparation and a short amount of time. They felt very comfortable with the user interface. Indeed, all the tools and features they needed were available within the 3D environment: collision checks, creation of snapshots, meta-data visualization, markers, transparency mode, and even the possibility to create vocal notes and events that are automatically linked to the extracted PDF report following the immersive review. IC.IDO clearly appeared as a very powerful solution for them. 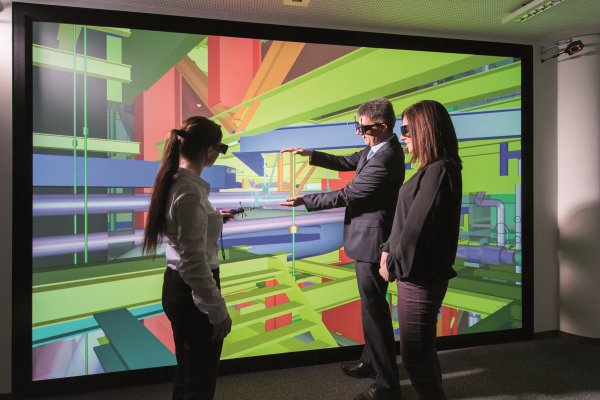 Initially, an MHPSE engineer would have needed to send his 3D data to IT 8 hours ahead of an immersive engineering review. Today, thanks to automated processes, IT needs less than one hour to prepare the full dataset a power station. After that short delay, the engineer who placed the request receives an automatic confirmation that the data set is ready in IC.IDO.

“Sometimes, when the engineers need to deal with a very specific area of the plant with a subcontractor, we just upload a part of the 3D data. Visualization of the entire power plant requires more time, but that is still only one hour at most. During the review, when engineers detect something that should be evaluated in more detail (collision, defaults) they instantaneously create marker points and snapshots,” explains Christoph Kastl.

MHPSE has succeeded in integrating Virtual Reality into its engineering processes and to involve multiple stakeholders, each with different preoccupations, and facing specific day-to-day challenges.

“Although we have come a long way since we implemented IC.IDO, we are absolutely sure that the perspectives of Virtual Reality for our industry are still infinite. Never-the-less, we can today claim that we have met our initial objectives. Virtual Reality contributes to developing a more innovative and efficient image of Mitsubishi Hitachi Power Systems Europe; a great advantage in the face of competition.” concludes Mr. Kastl.

MHPSE’s decision-making process is running much smoother than before the implementation, thanks to a full-acceptance of IC.IDO by their engineers. Today these achievements allow MHPSE’ to prove very easily the tangible effects of IC.IDO integration on their internal processes.