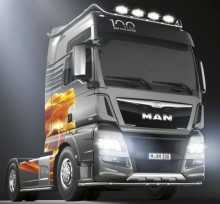 With rapid data preparation in virtual reality workshops, powerful assembly functionalities and user friendliness, ESI’s IC.IDO proved to be the right choice for this collaboration. IC.IDO’s usability, physical calculation and real-time detection of parts colliding during the assembly process matched MAN’s needs. Not to mention, what previously took us two weeks can now be completed in just one day.

In a rapidly globalizing market environment, commercial vehicle OEMs and their suppliers are facing a very dynamic business climate. Innovative virtual product engineering technologies have definitely become a precondition to sustain and improve their competitiveness, growth and quality standards.

Virtual Reality is making this possible, bringing design, engineering and manufacturing teams together to work on the up-to-date virtual prototype to improve the assembly and disassembly processes.

Back in 2010, MAN approached the University of Applied Sciences Upper Austria, Campus Steyr, to collaborate on a project where MAN could implement Virtual Reality into their planning process.

MAN’s three main goals in applying this new system were to anticipate the assembly/disassembly sequence, to significantly improve the assembly sequence, and to make the entire process faster and more efficient by simplifying operator tasks and taking into account ergonomics and accessibility at an early design stage.

Ultimately, MAN was interested in creating a better product, in less time, and at a lower cost. The University of Applied Sciences knew exactly how to help.

Having a Virtual Reality CAVE on-site, they already had some expertise in this area; however, the solution they had at the time wasn’t able to handle a sufficient quantity of data to render a smooth high-scale, real-time and immersive experience of the product.

After researching the top Virtual Reality players in the market, it appeared to Obermair, Professor at the University of Applied Sciences, and his team that ESI IC.IDO’s usability, physical calculation, and real-time collision detection was exactly what MAN needed. Implementing ESI IC.IDO was very simple and quickly accepted by the operators, management, and subcontractors alike.

Deploying Virtual Reality as a solution meant that there would be a change in the way things were done. As with any new technology, there is a certain ramp-up period before it becomes fully operational and functional. It was during this phase that MAN realized how ESI IC.IDO was more than just a virtual assembly planning tool. It was a collaborative and communicative platform where different stakeholders could share their knowledge and expertise.

Once all the new users had become familiar with Virtual Reality, two main benefits became apparent early on from using ESI IC.IDO. First, the designers, operators and subcontractors were able to exchange views about the 3D prototype even before the manufacturing facility was built. Secondly, it helped the factory builder anticipate the needs of MAN so that it would operate with the highest possible level of efficiency.

When asked to describe a typical production planning process before and after using IC.IDO, Obermair explained: “This is how we used to create a new assembly line: from Monday to Friday people work on the assembly line. Then they work on improving the assembly tools and the assembly process. The following Monday through Wednesday they would slowly start the assembly line, which is neither operational nor effective. Sometimes it takes a total of two weeks to make it 100% operational. With IC.IDO, on the other hand, the designers, operators, contractors, suppliers and assembly planner all discuss the new assembly line together. They detect the errors, modify them, finalize the design and begin building the assembly sequence on Friday. By Monday, it’s 100% productive.”

In the future, Obermair’s goal is to make assembly operations even more realistic in the CAVE. (Fig.1) “We already track some real tools but the challenge now is to improve the feedback the operator gets by introducing some force sensation to the person doing the manipulating”, he states. Now, instead of just seeing the environment in 3D, real “tracked” assembly parts and tools are used in a virtual environment and real components are combined with virtual ones. As for right now, Obermair believes that IC.IDO is the most user-friendly solution available which is able to simulate large scale assembly/disassembly sequence optimization processes. Obermair’s goals for the future as stated above are specifically related to Mixed Reality and force feedback. Mixed Reality is when objects from the real world merge with the virtual world to produce an environment where the user is unable to decipher reality from virtual reality - the two worlds now seem like one. (Fig.2) In this atmosphere, physical and digital objects co-exist and interact, together, in real time. (Fig.3).

In addition to Mixed Reality, Obermair hopes to make the operator’s experience even more immersive and realistic by adding force feedback. Force feedback is added to the real elements and tools, such as vibrations or sensations. Ultimately, the goal is to make the work of assembling the truck in the CAVE as close to real life as possible. In summary, MAN and the University of Applied Sciences Upper Austria, with Franz Obermair, were able to simplify the set-up process of a new truck assembly line while, at the same time, making it run more efficiently than they ever could before. The amount of time spent on the entire process was greatly reduced because everyone involved was able to collaborate together to detect problems, find solutions and make decisions quickly, allowing for fewer meetings. And by being able to correct errors in the design phase rather than on the actual assembly line, they saved a great deal of money. With Mixed Reality and force feedback as part of the future, only time will tell what other benefits MAN can reap by continuing to invest in IC.IDO.

MAN Truck & Bus Österreich AG (MTBÖ) headquartered in Steyr is the Austrian subsidiary of MAN Truck & Bus AG (MTB). In addition to the production of the light and medium truck series, the manufacture of cabs (also for special vehicles) and component manufacture, it also covers the areas of After Sales, Academy and Research and Development for all series and components in MAN’s interlinked development network, as well as a pre-series center.