ESI Group, pioneer and world-leading solution provider in virtual prototyping for manufacturing industries, announces the latest release of ESI's Casting Simulation Suite, composed of ProCAST & QuikCAST. The suite provides a predictive evaluation of the entire casting process, including filling and solidification defects, microstructural changes and part distortion. It enables rapid visualization of the effects of design changes for cast parts, to aid in making the right decisions from an early stage of the manufacturing process. Virtual Prototyping enables foundries to shrink product development costs, reduce time to market, and increase product quality 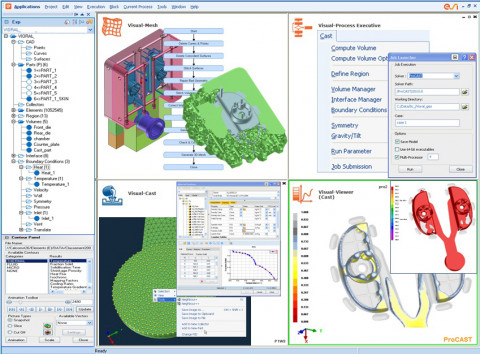 This new release includes a complete and new user environment, with a modeler that drastically reduces the preparation time thanks to a new methodology, new interface and enhanced automatic assembly. Also, the first release of the new pre-processor, Visual-Cast, provides set-up of process conditions straight onto the CAD topology, instead of onto the meshing. This gives the possibility of adapting the model to the simulation needs without resetting the process definition. This version of the Casting Simulation Suite also provides an advisor to assist in computing the mechanical properties of aluminum after age hardening treatment for parts like wheels, suspension components, cylinder heads and engine blocks. This tool has been originally developed by Rio Tinto Alcan, and by Michel Garat in particular.

To ensure sound castings, major functionalities like core gassing, oxide particles tracing and prediction of burn-on and mold penetration have been implemented.

In addition, users will benefit from the results of global research projects on light-weight materials and superalloys that will lead to improvements in centrifugal casting modeling and in the prediction of micro-porosity.

SALSA 3D helps calculate and size gating and running systems for the High Pressure Die Casting process. It assists in designing gates, runners and overflows by controlling the maximum gate velocity and thickness based on the available pressure machine. This potentially delivers significantly increased yield and reduced die development time and the filling system can be validated using ProCAST or QuikCAST.

SALSA 3D will be integrated gradually into the ESI Casting Simulation Suite, with the aim of offering a software combination that helps maximize productivity, reduce development time and improve the quality of parts.