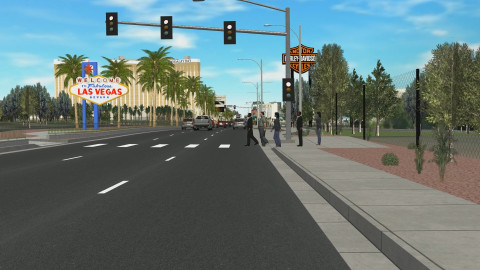 Demonstrator presented at the CES, based on ESI Pro-SiVIC™. Visitors were invited to experience new automated features embedded in a vehicle by “driving” it across the city of Las Vegas.

Last January at the Consumer Electronics Show (CES) in Las Vegas, ESI teamed up with leading automotive supplier DURA to introduce an innovative way to test automotive systems virtually, using Pro-SiVIC™. Together, the companies developed a realistic 3D simulation environment representing part of the city of Las Vegas — including actual road layouts, road signs, and pedestrians — and conducted virtual tests of driver assistance and autonomous systems. The application clearly demonstrated the ability of Pro-SiVIC™ to support the development of safer automotive systems and to virtually perform extensive tests to assess their reliability. Not only can this save thousands of hours of driving tests, but the capability also empowers designers, manufacturers of automotive systems and OEMs to better understand the behavior of their products in real life, and thus to deliver greater innovations at a faster pace.

Building on existing capabilities, the latest release of the software Pro-SiVIC™2017 delivers usability, software ergonomics and efficiency improvements to help users speed-up the construction of realistic 3D environments and further accelerate the virtual testing of their products.

To facilitate scene preparation — one of the major time-consuming steps of the virtual testing process – the Pro-SiVIC™ development team focused on delivering greater interoperability with related tools. For example, a new import module supports the import of OpenDrive files, an open source format widely used in the industry for the description of virtual scenes.

The preparation of virtual scenarios, another time-consuming task, is now made more simple and intuitive thanks to a new function that allows engineers to define vehicle motions based on driving sessions, which can be recorded straight from a desktop compatible steering wheel.