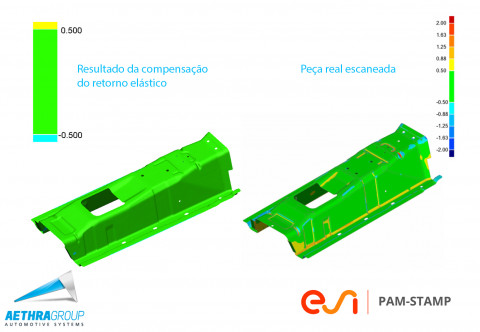 With the latest version of ESI PAM-STAMP 2017, considerable efficiency improvements have been achieved when working with complete line dies. Importing the geometry, setting up, and analyzing line die simulations has become as fast, easy and straight-forward as when working with only one operation! It is a huge step forward and makes working with ESI’s sheet metal forming solution PAM-STAMP even more enjoyable and efficient

The release of ESI PAM-STAMP 2017 delivers major efficiency improvements for setting up progressive, transfer and line dies. ESI engineers have redesigned the User Interface (UI) in order to significantly reduce the number of “clicks” and drastically increase work efficiency. Setting up processes is now done directly following a new and streamlined horizontal workflow, facilitating the setup of the entire stamping process; end to end.

Also new in PAM-STAMP 2017, a centralized ‘Operations Manager’ enables easy definition of the global layout for multiple operations. The stamping process is managed by a completely new ‘Process Editor’. Kinematics can be quickly defined per operation, and users can easily add, modify, or remove tools.

Beyond processing geometrical draw beads imported with the die face design, it is now also possible to generate geometrical drawbeads based on the information provided with equivalent draw beads, in one click and fully automatically.

Analysis of a process is executed with the accurate PAM-STAMP Solver, by default running now in Triple Speed mode; a technique developed by ESI Group to speed up stamping simulations by a factor 3 to 5. Triple Speed has been validated over several years and avoids the disadvantages of commonly used techniques to speed up simulations. Only from ESI, it is the key to getting accurate results in the shortest possible time: something especially important in the early phase of a project.

In the new PAM-STAMP, a streamlined workflow and efficient numerical techniques were added to take into account the elasticity of tooling. Advanced simulation, incorporating detailed modelling of tools and dies, is easily achieved for final validation.